Kaddu ki Sabji, a well versed Indian dish served hot with puris or parathas or even phulkas. In northern India, it is popularly known as Kohde ke Sabzi also. Majorly served in Breakfast but it is not bound to breakfast only. Rather, you can serve over at Lunch and Dinner as well.

I know, not everyone love Kaddu (Pumpkin). But, honestly,  this kaddu ki sabzi will surely be your favourite, once you make it and savour it. A homely comfort meal that can definitely beat any heavy or rich meal, you bet.

Coming down to the ingredients, let me tell you, this kaddu sabzi recipes involves few basic ingredients only.

So, we need pumpkin of course, cut them into small cubes,  that has to be cut into cubes. Then, we need a mix of spices that is popular as panch phoran. Panchphoran includes, fenugreek seeds, fennel seeds, cumin seeds, mustard seeds and nigella seeds.

Spices powders that will go into it are, salt, turmeric powder, coriander powder and garam masala powder.

As the name also says Khatta Meetha, which means sour and sweet. So, the recipe calls of addition of dry mango powder for sour and tangy hint. And, jaggery or sugar for sweet touch. However, if you do not have dry mango powder (amchur) with you, then simply swap it with lemon juice.

For Spiciness, we are adding green chilies and dried red chilies. You can indeed give the spiciness to the dish as per your liking. 🙂 Cook this kaddu ki sabji in mustard oil only for the best flavours. But, if you do not have it or do not like it, go on ahead with regular vegetable oil.

The combination of all these hot spices comes up with a deliberate flavor of the North-Indian household. Also, I missed mentioning that I cook the Khatta Meetha Kaddu with the peels on, since it gives out an immense flavor to the dish. Although it can be made without the peels, but the Pumpkin gets too soft and mushy and later moistens easily. 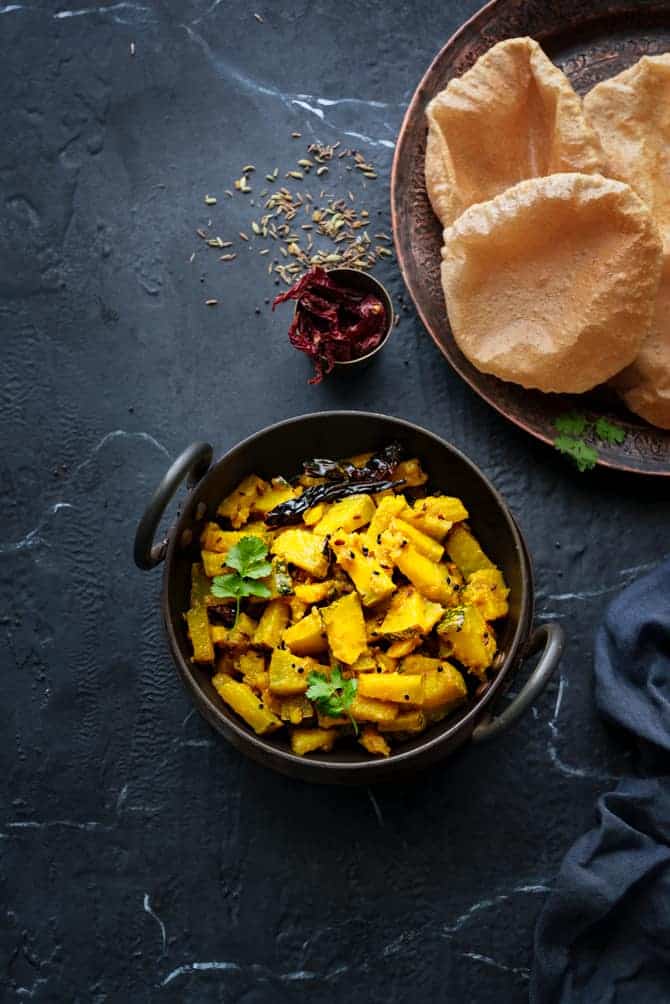 Do you know that pumpkin is one of the healthiest Vegetable with tins of benefits? Here are some of the health benefits which you might not be aware of so far. It gives fuller feel to a human body i.e it only consists of 50 calories per cup and 3 grams of Fibre.

A cup of cubed pumpkin contains almost twice the recommended daily intake of Vitamin A, which promotes good vision. So you know now it's good for eye sight as well. Pumpkin prevents Hyper-Tension and helps lowering Blood Pressure. Also it helps getting a fulfilling sleep and a healthier Heart.

The combination of all these hot spices comes up with a deliberate flavor of the North-Indian household. Also, I missed mentioning that I cook the Khatta Meetha Kaddu with the peels on, since it gives out an immense flavor to the dish. Although it can be made without the peels, but the Pumpkin gets too soft and mushy and later moistens easily.

I'm listing the Ingredients and the Method, Do give it a shot.

How to make Kaddu Ki Sabji Recipe - Step by Step

In a pan or kadai, heat mustard oil  until smoky. Reduce the heat to low and add panchphoran and dried red chilies, fry fro few seconds

Add kaddu, green chilies and sauté on high for 3-4 minutes

Now add garam masala powder, jaggery or sugar, and amchur or lemon juice, mix. Cook for another few minutes until soft but not mushy.

Kaddu ki Sabji is ready to serve. Dish out and serve with hot puris

More Vegetarian recipes for you:

If you made my Kaddu Sabzi Recipe, please let me know how it turned out for you! I'd love to hear through your comments and ratings below. 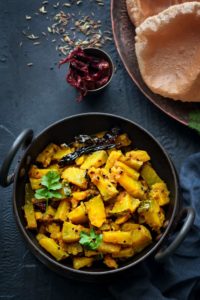 Prevent your screen from going dark

I am Farrukh, the face behind this beautiful recipe blog Cubes N Juliennes. I am a microbiologist by qualification turned into a Food enthusiast... Know more about me ->